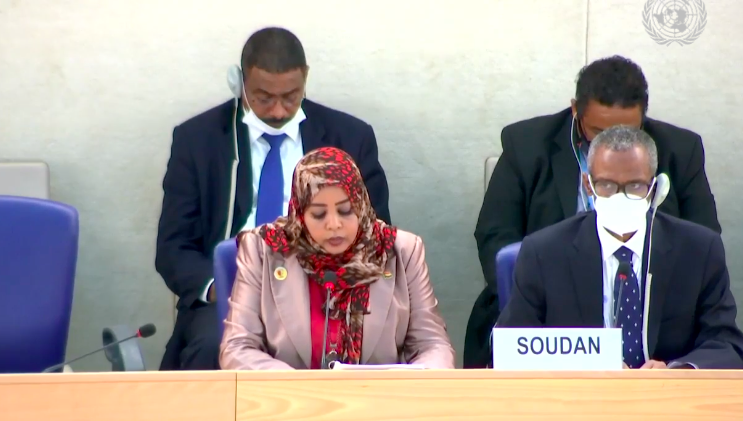 Sudan: Justice and cooperation mechanisms must be implemented to ensure a peaceful transition

During the Human Rights Council’s 50th Session ( 13 June to 8 July 2022) Sudan presented its report in the third cycle of the Universal Periodic Review. ISHR delivered a joint statement on behalf of MENA Women Human Rights Defenders Coalition, Sudan Women Rights Action and Nora Center for Combating Sexual Violence, urging Sudan to implement effective measures to guarantee the rights of protesters, women human rights defenders and the rights of women and girls. Furthermore, Sudan must accept and implement all recommendations.

This week, in the framework of the adoption of the Universal Periodic Review (UPR) of Sudan in its third cycle,  States welcomed the ratification by Sudan of the international cooperation mechanisms and its acceptance of the UPR recommendations. On the other hand, States also called for a peaceful and democratic transition and the continued implementation of commitments to achieve national stability.

While Sudan affirmed its protection of freedom of association and the rights of civil society organisations, including by facilitating the work of press and media workers, they noted 29 recommendations that remain outstanding in the context of the crisis that continues to affect the rights of protesters and women in the country.

Sudan authorities continue to commit serious human rights violations against protesters. Despite statements by Sudan’s representative at the fiftieth session of the Human Rights Council (HRC50) on the release of detainees – which contradicted the High Commissioner’s report on the country -, arbitrary arrests, enforced disappearances and torture continue to occurr in the country and require effective and prompt investigation.

Countries such as Lesotho mentioned in their intervention the urgent need for Sudan to redouble its efforts to address abuses by state authorities. In this regard, several speakers encouraged relevant legislative reforms. For example, the country’s Penal Code still contains provisions limiting personal freedoms and criminalising blasphemy.